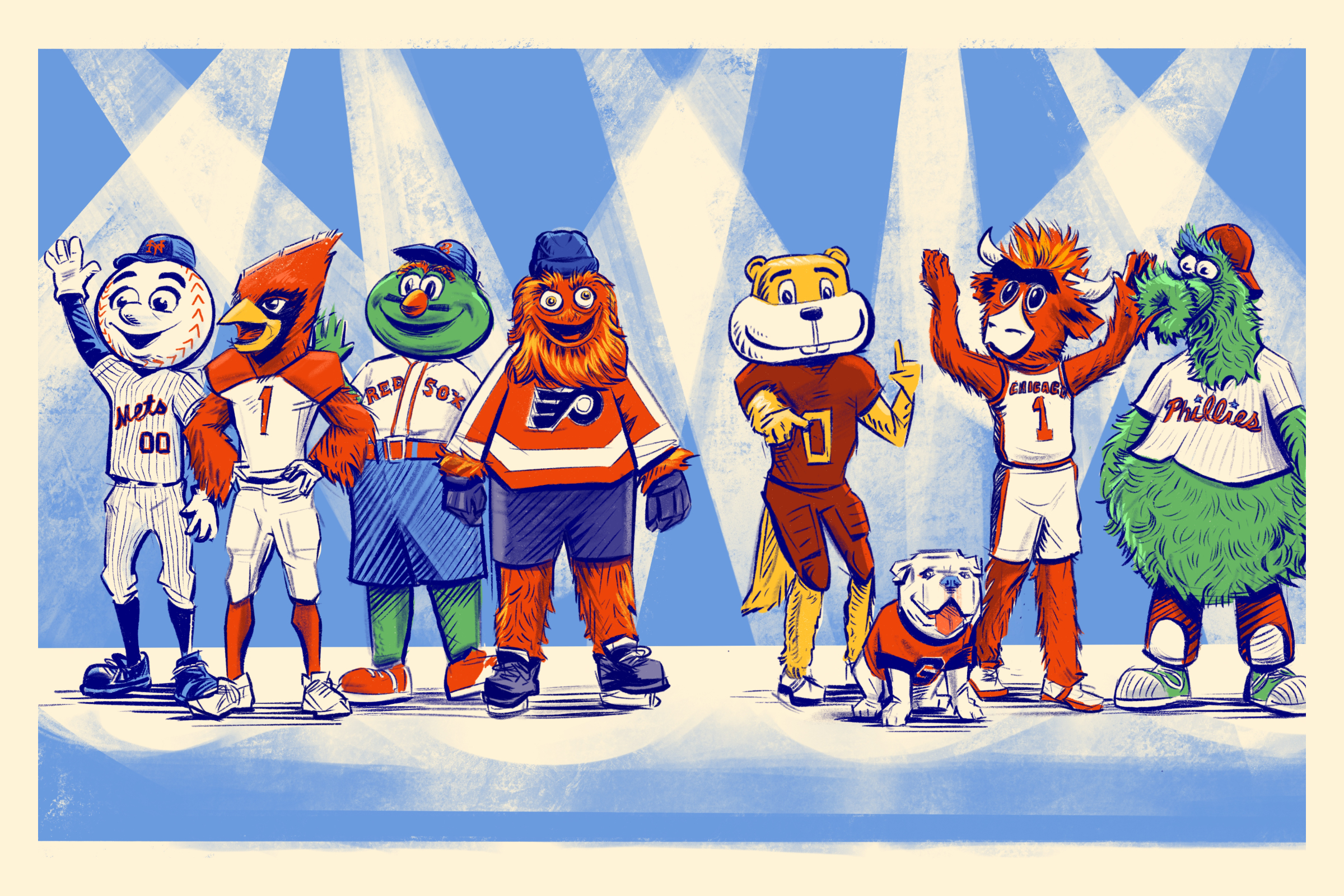 Inside the Secret World of Professional Sports Mascots

It’s a particularly hot night for a September baseball game. Mr. Met, a man with a giant baseball for a head, surveys the boisterous crowd. Although a fictional character, he has his beliefs and values. He loves to dance and has a “real” tongue. He does a number for the dugout and sticks his tongue out at the opposing team. The crowd roars back, as if in gallant conversation.

Mr. Met is not an athlete, nor is he a fan. The man in the suit, formerly AJ Mass, exists somewhere between these two worlds. He’s the dynamic, interactive symbol the team needs and the embodiment of the slapstick comedy the crowd craves. He has personal relationships with season ticket holders, secret handshakes with kids, and notorious beefs with haughty umpires. Players don’t much notice him, but he notices them. And although Mass is an introvert with the mask off, Mr. Met offers him the opportunity to be someone entirely different.

The bombastic, complicated world of mascots is an eccentric subculture of sports. The individuals inside the sweaty, uncomfortable suits are motivated by the euphoria that comes from bringing people joy as well as the anonymity that allows them to be someone — or something — else.

Every mascot has a unique origin story. But once they begin, the work is addictive. Take 20-year Phillie Phanatic veteran Dave Raymond, who got his start as an intern in the promotions department. One day, his boss convinced him to try on the Muppet-like suit, and the rest is history. Although he has hung up his costume, he now runs his own mascot branding business.

Raymond believes having a deaf mother helped him develop the invaluable physical communication skills necessary for the job. “When you work with physically and emotionally challenged adults and kids, they fall in love with Phanatic,” he notes. “I saw a young man, Kevin, for years after meeting him at a leukemia fundraiser. When he passed away, his family asked me to come to their home. That’s the connection they felt. There are so many stories like that.”

Former Houston Rockets Clutch the Bear mascot and Mascot Hall of Famer Robert Boudwin started his career as the University of Delaware’s YoUDee the Blue Hen. “I was put on a partial scholarship to restructure the mascot because they didn’t have anything built,” he explains, adding that he was the quirky class clown that cheerleaders loved having on their squad. “I wrote skits, booked appearances and washed the costume.”

After teaching classes for the Universal Cheerleaders Association, Boudwin tried out for the Houston Rockets mascot job. When he landed the gig, he created the persona. “I was hired to be a teddy bear,” he recalls, “because they thought a big missile would be too intimidating for children to hug.”

Although retired, he still attends the annual UCA Mascot Camp, where many performers start their journey. Beginners get insider tips and practice animating the character. Veterans workshop skits and hone expressionless storytelling skills.

As any tenured mascot will tell you, this isn’t a job just anyone can master; it’s more than big-pawed spirit fingers. The craft requires endless dedication, silent stamina and the quirky know-how to make a crowd of 20,000 erupt, all without saying a word.

So what’s it like to be a sports mascot? “No one really understands what we do,” says Mass. “It’s a weird, specialized universe.”

First, let’s get this out of the way: Yes, it’s hot in there. But that’s not the only issue. “The bigger problem is the lack of oxygen,” Boudwin explains. “You can’t wait to get out of sight and pull off that head because you’re breathing in your own carbon dioxide.”

Being in the suit for 30 minutes is the equivalent of an eight-hour workday. You can lose 10 pounds in that time frame unless you constantly hydrate. That’s how physically taxing the job is. “The worst part of the job was taking showers,” Raymond says with a laugh. “I had to take a few a day. I’d run out of shampoo all the time.”

Beyond the physical demands, it can be lonely. “That’s the hardest part,” Boudwin remarks. “If you want to do it at a high level, you’re a one-man team. You have to advocate for yourself. You’re one of the only voices pushing the envelope, doing things that make adults laugh.”

The job may seem like a silly one, but the considerations are serious. Mascots shouldn’t, for instance, hold a baby. “People would hand me babies all the time, which boggled my mind,” says Mass. “If the baby urinates, there goes your costume. On a more precious note, ‘Oops I dropped your baby’ — you don’t want that!” (That suit, by the way, can cost upward of $30,000, plus getting it cleaned is often the performer’s responsibility.)

As the felt-fabric face of a franchise and the heartbeat of the fans, mascots don’t want to do anything that could be misinterpreted as inappropriate. Hugging, for example, is surprisingly fraught with peril. Pirate Parrot was once telling a child to stop playing with his beak mid-hug and, in the resulting photos, looked like he was swallowing the kid. Mascots must assume that all eyes are on them the moment they put on that suit. “You’re ‘on’ the entire time,” Mass adds. “You can’t take a break; that’s when you’ll get captured on camera doing something stupid.”

Even interacting with officials can be challenging. Case in point: Mass was once ejected from a game when the umpire thought he was sticking Mr. Met’s tongue out at him. (Wildly enough, his tongue was suspended for the rest of the series.) And of course every performer has tales about drunken encounters and X-rated comments from fans. As Mass explains, “Nine times out of 10, it’s someone asking, ‘Are you a guy or a girl in that suit? C’mon, you can tell me.’ I’ve been kicked in the nuts before.”

Admittedly, there isn’t much diversity to be found in the world of sports mascots. Rana Lee Araneta, the first female mascot, didn’t land her job as Syracuse University’s Otto the Orange until 1991. These days, there’s an estimated 4:1 ratio of male to female performers.

And then there’s the pay. Performers don’t make a lot of money, at least not at first. In the nineties, newbies made around $15 an hour. Nowadays, most major sports mascots are salaried, with tenured individuals pulling in upward of $100,000 a year along with appearance bonuses.

Beyond the furry bellies, plush tongues and giant shoes, mascots are sketch comic mavericks. They write interesting skits that entertain both the 55-year-old guy who doesn’t laugh at anything vanilla and the 5-year-old kid burying her face in a bucket of popcorn. “When you can entertain 18,000 people with something you wrote, produced, directed and starred in, it’s an awesome feeling,” Boudwin notes. “There aren’t many people who can do that, unless you’re Sylvester Stallone and you wrote Rocky.”

But not every joke lands. “The only time I got booed off the court was when I made fun of Michael Jordan,” he recalls. “I learned my lesson very quickly. I didn’t make it even five steps onto the court, and the whole court booed me. Even the home team! The entire place revolted. Michael Jordan is the only player you can’t make fun of.”

According to Boudwin, the NBA’s mascots are the least competitive of the bunch, often swapping sketches and stories. “If I do a skit on Wednesday night, I talk to Jazz Bear about it after the game and he does that same skit Friday night,” he explains. “There would rarely be a day when I wouldn’t talk to other mascots to share ideas and best practices.”

How do they pull off their shenanigans safely? Handlers. Also known as assistants, interpreters, bodyguards, roadies, sidekicks or secondary characters, they are essential to coordination. Handlers tend to be more prevalent in the NBA, because of the size and intimacy of the arena, the hardness of the floor, and the availability of a PA system.

If a mascot is lucky enough to have a handler, they typically keep the same one throughout their career. Boudwin speaks fondly of his: “I had the same assistant for many years. We’d hug and embrace, and we knew when we had nailed a skit. Plus an assistant’s engagement with a fan is just as important. If a kid is about to cry, they can stop that. Or they can protect you if a middle-schooler wants to impress his friends and beat you up.”

Ultimately, performers stick around because the fans’ elation offers a break from the troubles of the world. And that connection is euphoric. Dave Raymond sees it as a form of therapy: “Everywhere you go, people can’t wait to see you. It’s an amazing feeling. It got me through the death of my mother and the dissolution of my marriage. It’s what made me better in little doses.”

Dan Meers, the Kansas City Chiefs mascot since 1990, echoes that sentiment. “With everything that comes along in life, you’ve got to remember the sun is going to come up tomorrow,” he notes. “Mascots remind us that you shouldn’t take things too seriously. Heck, laughter is like changing a baby’s diaper: It doesn’t change anything permanently, but it sure makes things more bearable for a while.”

Of course, we’ve seen cloudy days in the sports arena as of late. Amid the coronavirus outbreak, we’ve grown used to a world without live sports, and when games did return this summer, they did so without fans in the stands. Like many of us, mascots can’t wait until sports are fully back in action, fans safely included.

“Last weekend, I almost talked myself into mowing the lawn in my costume,” an unnamed performer recently revealed to ESPN. “It kind of feels like a rain delay: We know the weather will improve, but we don’t know when. In the meantime, we sit alert on the bench, watching the skies and raring to go when summoned.”

Get the full story behind Robert Boudwin’s encounter with Michael Jordan.