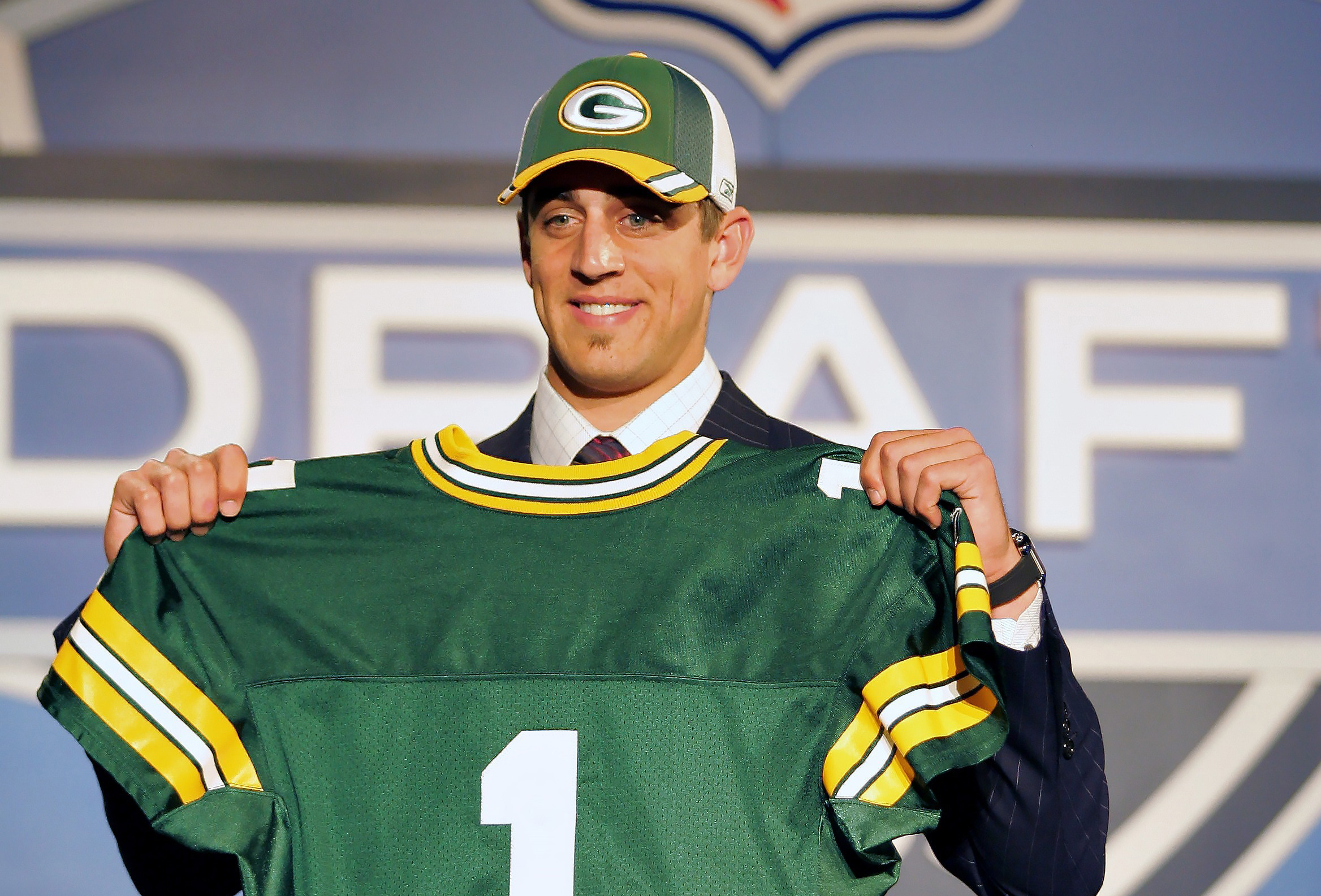 Is Aaron Rodgers Really the Best Player in the NFL?

Photography by Per Bernal

He had flown across the country from his collegiate home in Berkeley, California, to New York City because he thought he’d be the star of the show. No, he didn’t think it. Aaron Rodgers knew the team with the No. 1 pick in the 2005 NFL draft, the San Francisco 49ers, would select the 21-year-old quarterback. It seemed like destiny.

He’d grown up three hours from San Francisco, and the 49ers were his favorite team. He’d idolized greats Joe Montana and Steve Young. He’d aced the interview and the workout with the team. For months before the draft, he was the presumed No. 1 pick — a “no-brainer,” as he later said in an NFL Films documentary.

Rodgers, looking crisp in a navy-blue pinstriped suit, was confident as he walked into the draft, one of six prospects who’d have cameras trained on them in the green room. Then-NFL Commissioner Paul Tagliabue announced the top pick, and it was… not Rodgers. The 49ers picked Alex Smith, a mobile and accurate quarterback from the University of Utah. Pundits applauded the choice. “No question, he was the right guy,” said ESPN analyst and former NFL quarterback Ron Jaworski at the time. In a flash, Rodgers’s childhood dream was shattered. But certainly he’d be selected soon. Right?

Nope. The second pick was a running back, Ronnie Brown. The third pick was wide receiver Braylon Edwards. Another running back, Cedric Benson, went fourth. When cornerback Antrel Rolle was taken with the eighth pick, only Rodgers was left in the green room.

And he kept falling. At that moment, Rodgers didn’t know he would eventually become one of the finest quarterbacks in NFL history, just that he was disappointed and embarrassed as teams continued to pass over him. The hours dragged on. The wait was the most painful and compelling kind of reality television, with Rodgers shrugging in disbelief.

And then, after nearly five hours, Rodgers’s flip phone rang. It was Green Bay Packers General Manager Ted Thompson. He told Rodgers that the Packers, who already had perhaps the best quarterback in the NFL in Brett Favre, were selecting Rodgers with the 24th pick. Instead of getting the nearly $50-million contract Smith signed as the No. 1 pick, Rodgers signed for some $8 million.

Among the players selected between the two were Troy Williamson, a wide receiver who caught a total of 87 passes in a five-year career best remembered for when he challenged his head coach to a fight, and Erasmus James, a defensive end who played just 23 games in a three-year career. Coincidentally, both were selected by a Packers’ rival, the Minnesota Vikings — a team that would spend the next decade yearning for a star quarterback.

How silly that all looks nearly adecade and a half later. Days before this NFL season kicked off, Rodgers signed a contract extension making him the highest paid player in league history. He is arguably the best and most valuable football player alive today, not to mention one of the most recognizable faces in the NFL.

He has made six Pro Bowls, won two NFL MVPs and owns one Super Bowl ring to go along with one Super Bowl MVP trophy. He currently holds the all-time NFL records for passer rating in a career and in a single season as well as the all-time record for touchdown-to-interception ratio. He used to date actress Olivia Munn, he currently dates retired racecar driver Danica Patrick and his State Farm commercials have become an iconic American advertising campaign.

It’s enough plaudits — the all-American star of America’s favorite sport — to inflate an ego to the point of bursting. Yet Rodgers and sports pundits alike credit that humiliating green room moment as something that helped propel the once-cocky kid to greatness.

“There really isn’t a weakness to Aaron’s game,” says CBS Sports analyst Jason La Canfora. “He sat and learned. He had to take his lumps. Early on, he was humbled by the way he came into the league. He was stuck in that green room on draft night for a long, long time. Then he was stuck behind Favre, and Favre threw lots of shade his way.” (What Favre told ESPN after Rodgers was drafted didn’t exactly sound like the welcome wagon: “My contract doesn’t say I have to get Aaron Rodgers ready to play. Now hopefully he watches me and gets something from that.”) “All that,” La Canfora says, “made him a pro’s pro early on.”

There is some debate as to who is currently the best player in the league: Rodgers or New England Patriots quarterback (and five-time Super Bowl champion) Tom Brady. You would not be faulted for picking either. An ESPN survey of 50 NFL insiders taken before the 2018 season had four quarterbacks considered Tier One, and only two were unanimous selections: Rodgers and Brady.

Brady is widely considered the greatest to have ever played the game, yet there’s a pretty easy argument to make that Rodgers is the best player in today’s NFL.

Essentially, it’s a matter of context. Rodgers has consistently done more in his career with less than Brady has. The latter has been surrounded by one of the finest football coaches of all time in Bill Belichick and rosters exponentially more talented than Green Bay’s. For much of his career, Rodgers has been something of a one-man army in this ultimate team sport: His offensive line has been a patchwork quilt, Packers’ running backs have been mostly anonymous fill-ins, and while Jordy Nelson had a remarkable run as the team’s top wide receiver, how much of that success was because of the quarterback?

Or it’s just that football is ayoungman’s game. Brady is now an immobile 41 years old. Rodgers is a spry and nimble 34 and still very much in his prime when healthy.

And there’s the rub: when healthy. Rodgers has missed 16 games to injury in the past five seasons, including seven games last season after breaking his collarbone while scrambling out of the pocket. What’s seen as one of Rodgers’s greatest strengths — his remarkable ability to escape pressure in the pocket then make pinpoint throws on the run — could become his greatest liability as he ages and slows down and can no longer withstand crushing hits. As the Packers learned in 2017, the blessing of his mobility can quickly become a curse.

Photography by Per Bernal

But unlike a quarterback like, say, Michael Vick, Rodgers’s success isn’t predicated on the threat to run. He’s one of the finest pocket passers in the game, too. His most remarkable talent might be that as he throws the ball downfield (which typically means a higher risk of throwing interceptions), Rodgers’s passing accuracy is among the best in NFL history. And his completion percentage is one of the best in NFL history. Better than his predecessor Brett Favre, better than the player selected No. 1 in the 2005 draft, better even than his childhood heroes Joe Montana and Steve Young. Rodgers has an incredibly strong arm, but La Canfora calls it a “restrained, refined monster arm.”

Yet just as La Canfora crowns Rodgers as the best player in the game today, the analyst can sense that Brady-sized shadow that looms over Rodgers’s career. Yes, Rodgers is great. But Brady is the greatest. A quarterback’s true mark of greatness is winning Super Bowls. And if we’re going to give context to Rodgers only winning one, we should also give context to Brady’s five.

Brady has been to a total of eight (!) Super Bowls, and his three Super Bowl losses were by an average of only five points apiece. A world where Brady has eight Super Bowl rings is conceivable; the next highest total for a quarterback is four. And talk about his advanced age all you want, but Brady’s most recent Super Bowl may have been his best yet. He nearly overcame a miserable Patriots defensive performance by throwing for a Super Bowl record 505 yards.

The question of who is the best player in the NFL, like so many sporting arguments, comes down to a tossup: Rodgers or Brady? It ends no differently than arguing the greatest of all time in other sports: Michael Jordan or LeBron James? Jack Nicklaus or Tiger Woods? Roger Federer or Serena Williams? Pick one, you’re right. Pick the other and you’re right, too.

You’d certainly think some experts would lean a bit more toward Old Man Brady as today’s top player. After all, he could very well be the best football player there’s ever been. But no dice. Eleven-year NFL veteran quarterback Sage Rosenfels picks Rodgers, too, calling him “the video-game quarterback who makes throws that in real life no one can actually make.”

Rosenfels makes many of the same arguments as La Canfora — that Rodgers has the stronger, more accurate arm and that the Packers’ roster has been mediocre or worse during much of his run — before going a bit further: “Brady is the best of all time, but I’d say Rodgers has had the highest ceiling of all time. If I were creating a robotic quarterback from scratch, there’s nothing I can think of that I’d want that he doesn’t have.”

Back to La Canfora. He’s torn between Rodgers and Brady, but ultimately, in the 2018 NFL, he’s on Team Rodgers: “He’s the best football player in the world. And when you’re shooting the shit with NFL players, they largely agree. He’s truly special.”